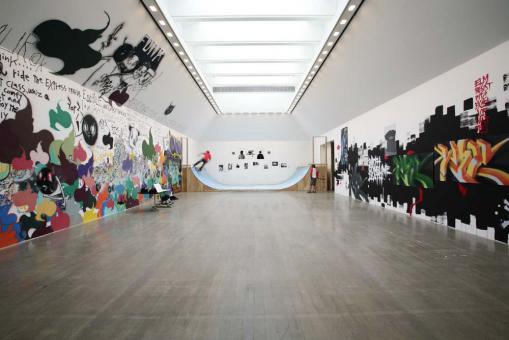 Hip-hop, which emerged on the streets of New York in the 1970s, and which consists of DJ, MC, break dance, and graffiti, gave shape to a new youth culture. Graffiti at that time involved the act of drawing pictures or words in subways or on buildings using color spray, and was used as a means to oppose the expanding rich-poor gap, discrimination, and authority. At the same time, it also gave rise to such prominent artists as Basquiat and Keith Haring. Afterwards, in the blink of an eye, it quickly sprang up in cities across the world, and each city saw the development of its unique form of the art. That situation persists today.

The X-COLOR/Graffiti in Japan Exhibition at the Art Tower Mito is the first large-scale exhibition in Japan to introduce domestic graffiti culture. Besides introducing the work of 38 graffiti artists active across the land, the exhibition also displays photographs and shows videos describing the history of graffiti from its first appearance down to the current day. Also exhibited are the relationships of graffiti with hip hop, skateboarding, and other forms of street culture.

People still have strong opinions about graffiti - for or against it -- as a form of expression, but please use this opportunity to observe this rich, diverse world.

A hands-on, experiential event for visitors to try out their hand on graffiti for the first time. A corner will be set up in the Workshop Room, supported by agnès b., where people can challenge themselves to draw graffiti using spray paint. Participating artists in the current exhibition will instruct attendees in the skills of spray control. agnès b. will provide protective clothing against the spray paint.
Date: Oct. 2 - Dec. 4, 2005 (Saturdays & Sundays)
Time: 12:00 p.m. and 5:00 p.m.
Venue: Workshop Room, Contemporary Art Gallery, ATM

The curators and artists of Yokohama 2005 Triennale, an exhibition of international contemporary art held primarily at Yokohama's Yamashita Pier, will join forces with their counterparts at Japan's first major exhibition of domestically produced graffiti, Art Tower Mito's X-Color/Graffiti in Japan, to hold a joint symposium in Yokohama. Despite the different nature of the two projects, they are sure to have a lively discussion of topics related to expression in public spaces, including the problems of regulatory restrictions and getting permission, the relationship between the artist and viewer, as well as between fine art and street culture, etc.
[Panelists]
Tadashi Kawamata (General director, Artist, Yokohama Triennale 2005)
Takashi Serizawa (Curator, Yokohama 2005: International Triennale of Contemporary Art)
Kenji Kubota (Curator, X-Color/Graffiti in Japan)
Kress (Participating artist, X-Color/Graffiti in Japan)
Iseo Nose (Cooperative planner, X-Color/Graffiti in Japan)
Date: Oct. 29, 2005 (Sat)
Time: 2:00 - 4:00 p.m.
Venue: Former Kanto Financial Bureau

A CAC Gallery Talker will lead viewers through the exhibition and explain interesting points that you might miss otherwise.
Dates: Oct. 15 - Dec. 4 (Saturdays & Sundays)

Mothers with young babies don't always get the chance to enjoy our exhibitions, so we have arranged for a babysitter to come on one day during the period to watch the little ones while the mothers can view the exhibitions more leisurely.
Dates: Oct. 15 - Dec. 4 (Saturdays and Sundays)
Time: 2:30 - 3:10 p.m.

9. Gallery Tour for Parents with Babies

Staff members will give a gallery tour for parents, with small children, who may normally not have the chance to visit exhibitions. This tour is made particularly for preschool children and their parents.
Date: Oct. 21, Nov. 11, 18