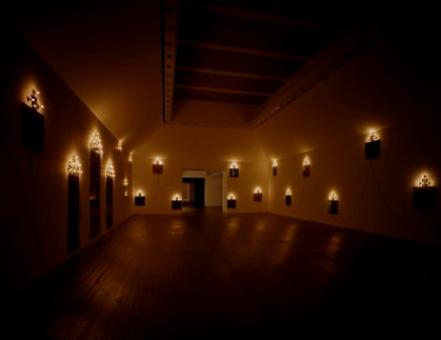 Christian Boltanski's first solo exhibition in Japan was planned and realized at ICA, Nagoya and subsequently at Art Tower Mito.
The artist visited both sites and produced installations matching them respectively. Personal belongings sealed up in tin boxes, "Monument" that resembled an altar by combining electric bulbs with repeatedly copieded hazy portraits of children, angelic silhouettes gliding on the surface of a high ceiling, and human figures looming up in candlelights - Boltanski's spiritual world brought forth a kind of awe-inspiring space while treating life and death in human surroundings. An installation composed of large quantities of clothes contributed by Mito citizens made the exhibition's climax, suggesting an absence of humanity or a holocaust.

2. Gavin Bryars Live at the Boltanski Exhibition
"The Sinking of the Titanic"