Koki Tanaka Possibilities for being together. Their praxis. 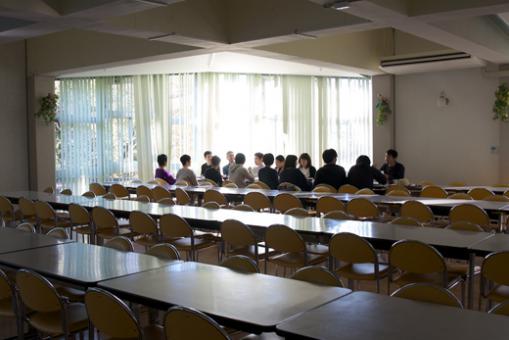 This exhibition marks the first large solo exhibition of Koki Tanaka in Japan. The artist has drawn much attention in recent years for his activities of seeking an alternative perspective and attitude to current social situations and existing frameworks, conducted through a variety of means such as video documentation, installation, writing, performance and organizing events. In the 55th Venice Biennale in 2013, Tanaka presented video works that included one that showed five potters working together on one pottery. Representing the beauty and difficulty of the act of collaborating on one thing, his works received international acclaim.
This exhibition focuses on Tanaka's activity after 2010, when he started to be interested in the activities of collaboration, with his new work at the center along with his recent works.
The new work produced for this exhibition is based on the six-day lodging and a series of workshops conducted during that time, in which general participants, facilitators and camera crews stayed together under one roof. Throughout the six days, which consisted of reading, cooking, making pottery, workshop related to social movement, discussion, interviews and so forth, the opportunity was there for everyone to think, to have dialogues and to practice about moving and community. In the exhibition, several video works based on the video documentation of the workshop are exhibited, along with items such as notes the artist made during the production.

*The new video work is estimated to be 230 minutes long in total.

On what kind of occasion do you open your heart to someone you have met for the first time?
In what kind of situation do you help someone next to you?
For what kind of reason do you trust someone, entrusting them with your own vulnerability?
We were living together and participating in a workshop in the mountain, away from everyday life. The camera crew stayed there as well, documenting the whole scene. I was there, you were there, and none of us know what it means yet. We cooked, read, enunciated, moved around, conversed, thought about society, did pottery and discussed. In a small society, we confirm our own positions, re-question our roles and sometimes find ourselves at a loss. We encounter the other, and care about that other in this way. You try to be together with someone you barely know, or even with others you can barely understand. To some, this situation is a natural one, while to others, it is something difficult to accept. The situation in this 6-day workshop may be provisional, artificial and temporary. However, if it is possible even temporarily, is it not possible whenever, wherever and with whatever?
Koki Tanaka

Born in 1975, Tanaka currently lives and works in Los Angeles. In his diverse art practice spanning video, photography, site-specific installations, and interventional projects, Tanaka visualizes and reveals the multiple contexts latent in the most simple of everyday acts. In his recent projects, he has documented behaviors that were unconsciously exhibited by people confronting unusual situations, such as one piece of pottery made by five potters and a piano played by five pianists simultaneously, seeking to reveal group dynamics in a micro-society and temporal community.
Tanaka has been showing widely, including at the Hammer Museum (Los Angeles), the Yerba Buena Center for the Arts (San Francisco), the Mori Art Museum (Tokyo), the Taipei Biennial 2006 (Taipei), the Gwangju Biennial 2008 (Gwangju), the Yokohama Triennale 2011 (Yokohama), and the Japan pavilion at the 55th Venice Biennale. He received a Special Mention for National Participation at the 55th Venice Biennale, 2013 and the Deutsche Bank Artist of the Year 2015 award. His publications include “Precarious Practice” (Hatje Cantz, 2015) and “Abstract Speaking—Sharing Uncertainty and Collective Acts” (NERO Magazine, The Japan Foundation, 2013). He also takes part in and collaborates with ARTISTS' GUILD and Contemporary Art Think-tank.
Website: http://kktnk.com/

Venue: Contemporary Art Gallery, Art Tower Mito
Dates: Saturday, February 20, 2016 - Sunday, May 15, 2016
Closed on Mondays (except March 21, public holiday) and March 22
Open Hours: 9:30-18:00 (no admittance after 17:30)
Admission: ￥800 (￥600 for advance ticket and group of more than 20 people)
*One ticket for three-time admission
Free of charge for children under 9th grade, seniors over 65, the disabled and one accompanying attendant
One-year Pass: ￥1000: High Teen Pass “H.T.P.” for youth between the ages of 15 and 19
￥2500: Adult Pass for those aged 20 and over
Organized by: Mito Arts Foundation
Grants from: The Kao Foundation for Arts and Sciences, The Asahi Shimbun Foundation
Sponsored by: Vitamin Creative Space
Supported by: AOYAMA|MEGURO, Asahi Breweries, LTD., ARTISTS' GUILD, The Japan Foundation
Curated by: Yuu Takehisa (Curator, Contemporary Art Center, Art Tower Mito)