Publicness of the Art Center – Phase2 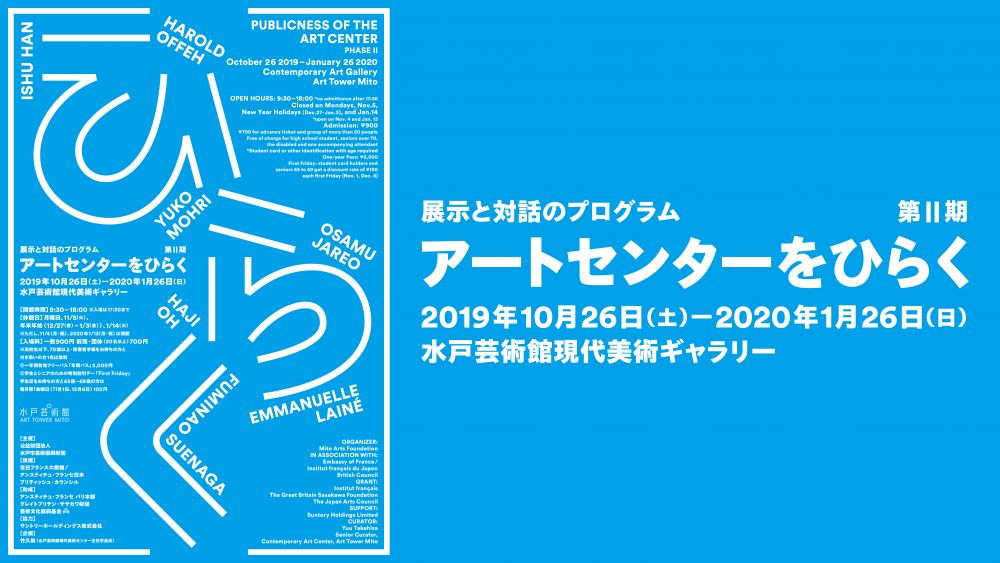 Marking 30 years in 2020 since Art Tower Mito’s opening, the Contemporary Art Center’s “Publicness of the Art Center” explores over two phases the role required of an art center in today’s changing society. Phase 1 was organized from March to May 2019, reinterpreting the Contemporary Art Center as a place where art is born and using the facility’s gallery space for creativity and dialogue between both artists and visitors as well as between fellow visitors. In Phase 2, the gallery will be employed as a space for cultivating dialogue and various activities centered on an exhibition.
This exhibition presents new work created by six artists who were invited to take up one-month residencies during Phase 1, conducting research on the Mito area and the Contemporary Art Center, and collaborating with local citizens. It will also feature documentary footage from Osamu Jareo’s Metamorphosis workshop, ongoing since Phase 1 and exploring the nature of dialogue and physical expression, as well as further workshops and a final presentation of the results.
In addition, the popular cafe space will appear in the Workshop Room inside the gallery from December 5th. It will serve as a place for people to spend time as they like, to interact with other people and take part in various activities. Opening up the Contemporary Art Center as a social space where works of art facilitate dialogue and connections that can lead to further developments in the future, the exhibition and program of related events will consider in practical ways the role required of an art center today. 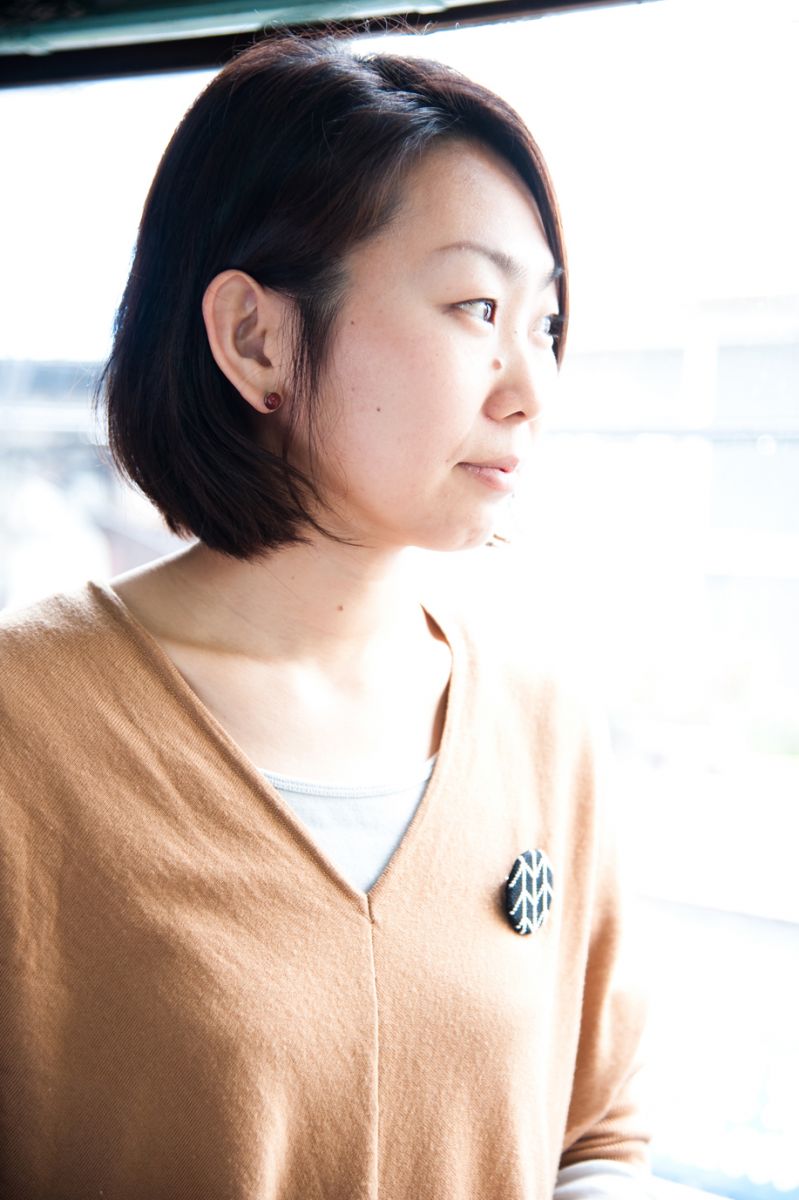 Born 1976 in Osaka, Japan. Lives in Wollongong, Australia.
Centering on dyeing, embroidery, knitting, and joining techniques, Haji Oh creates spatial artworks employing textiles, photography, and voice. From acts related to fabrics and through workshops and dialogue, she collects memories along with the unspoken stories and lives of people, and develops them into the motifs used in her practice. Since 2014, she has engaged in a series called grandmother-island, a project in which she attempts to trace the trajectories of people who have crossed the seas between Australia, Japan, and South Korea, and to focus on the individual narratives that are interwoven with history. Her solo exhibition “Memories in Weaving” will be held at Oyama City Kurumaya Museum of Art from October 12 to December 15, 2019.

Born 1977 in Accra, Ghana. Lives in Cambridge, UK.
Referencing mass culture and social phenomena, Harold Offeh’s art focuses on stories related to a space or place revealed through the body. His highly playful and performance-centered practice employs laughter and participation to prompt hidden questions about representations of the body and identity as well as our habits or modes of behavior. His series Covers, which pays homage to 1970s and 1980s pop music, has been shown at The Studio Museum in Harlem, New York, in 2014 and many other places. In 2018, he was invited to participate in Nuit Blanche Toronto in Canada, where he presented a performance that delved into the city’s history of suppression and liberation of queer culture. 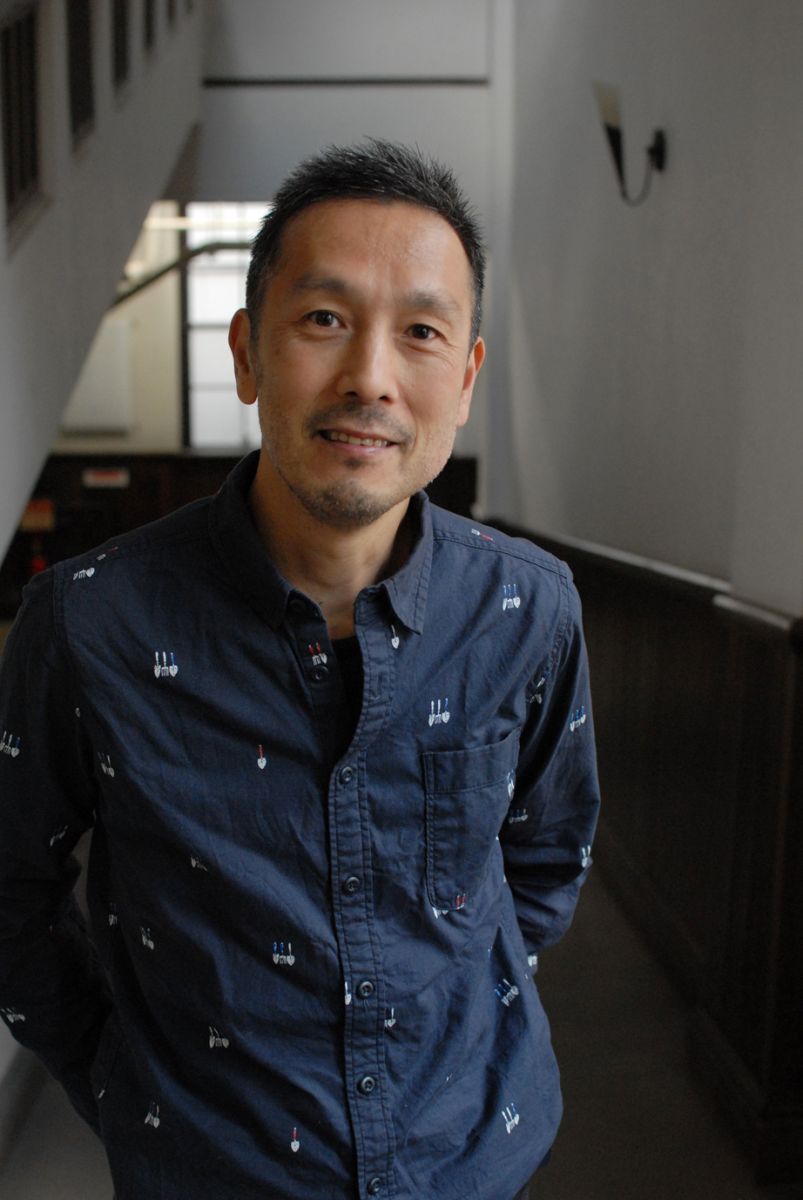 Born 1965 in Osaka, Japan. Lives in Tokyo, Japan.
Osamu Jareo formed a dance group with Misako Terada in 1991. In 2002, he won both the Next Generation Choreographer Award and Audience Award at the Toyota Choreography Award. In 2004, he received the Kyoto City Special Bounty for Art and Culture. He studied in Berlin for a year in fiscal 2008 on the Program of Overseas Study for Upcoming Artists, organized by the Agency for Japan Cultural Affairs. His recent activities have focused on solo work, collaborating on the Thikwa + Junkan Project with a German theatre company for the disabled, creating the Totsu Totsu Dance project with elderly people in Maizuru, Kyoto, and Monkey and Mortale, a project based on research he did on evacuees in Yuriage, Miyagi. From 2017, he started to develop the Metamorphosis Project that explores the theme of life changes, inspired his father’s frailty and illness. His writings include the book Totsu Totsu Dance at Nursing Homes: Like Dance, Like Nursing Care (Shobunsha). 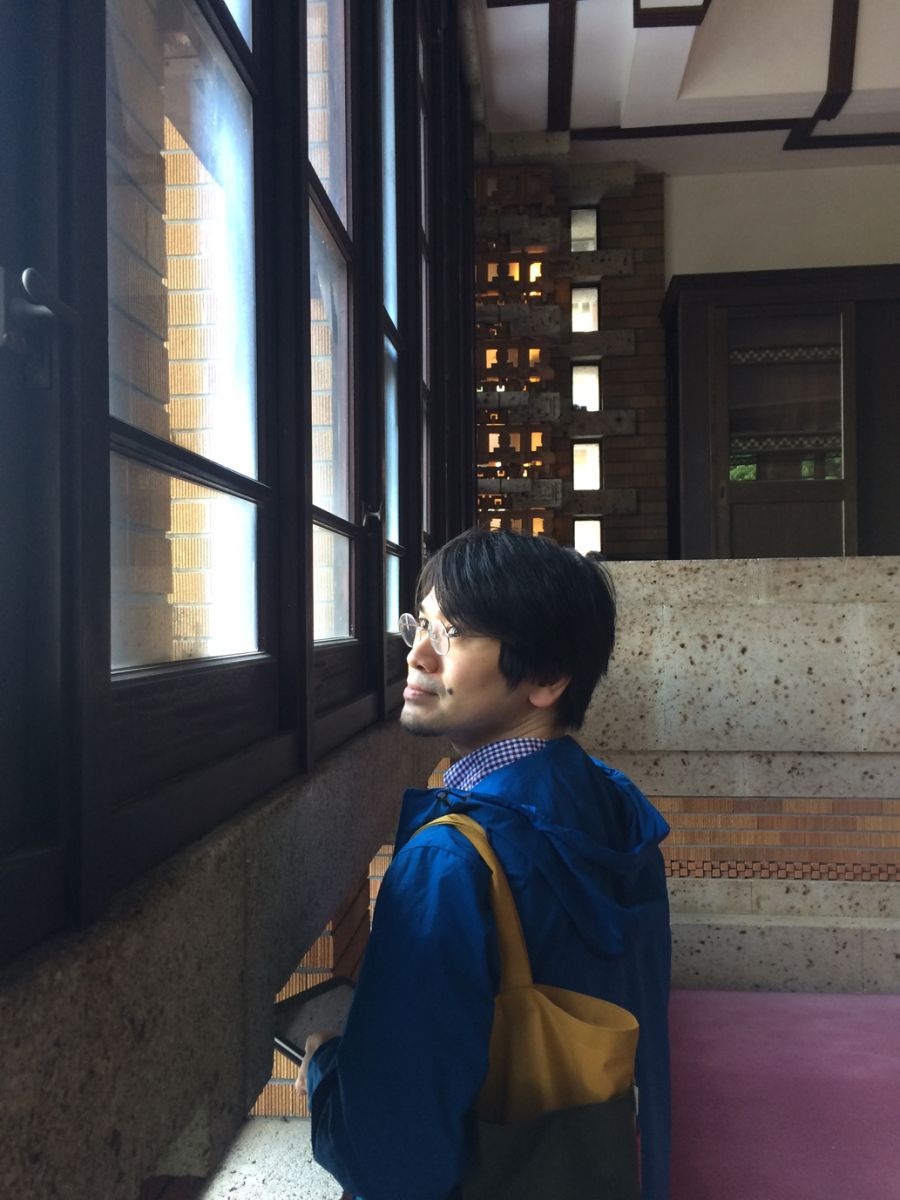 Born in Yamaguchi, Japan. Lives in Tokyo, Japan.
Fuminao Suenaga creates painting and sculptural artworks based on certain visual characteristics that he examines in everyday objects as well as the situations and spaces that encompass works of art. By eliciting the appearance of a subject in a way that differs from usual, such as by copying over an image and expanding or extracting that particular element, he engages in series that opens up the essential meaning of portrayal. His solo and group exhibitions include ‘APMoA Project, ARCH Vol. 11: Suenaga Fuminao “Museum Piece”’ (Aichi Prefectural Museum of Art, Nagoya, 2014) and “1974, Part 1, Born in 1974” (Museum of Modern Art, Takasaki, Gunma, 2014). 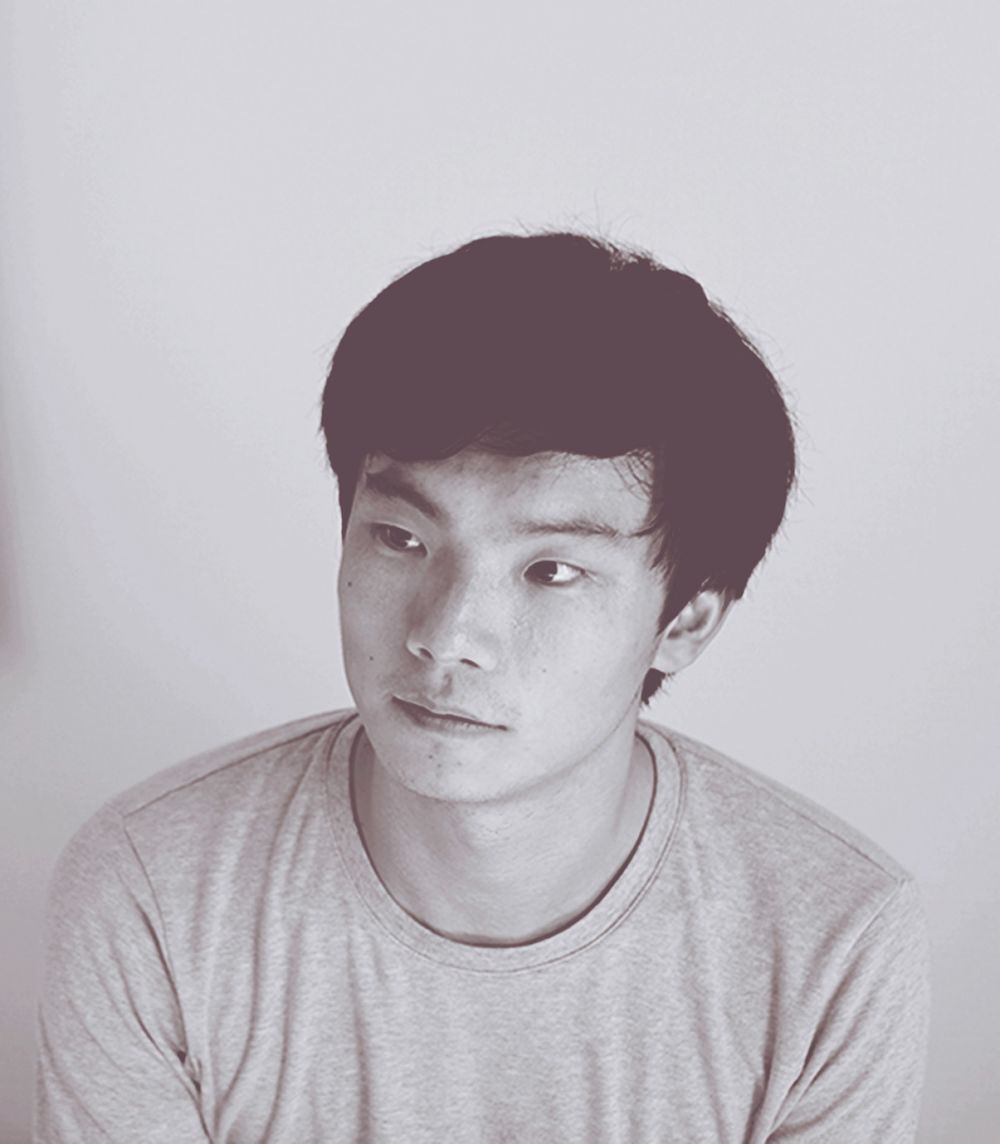 Born 1987 in Shanghai, China. Lives in Tokyo, Japan.
In his practice, Ishu Han develops a sincere, at times humorous, expression of questions and uncertainties that arise from the relationship between the individual and society, framed from a personal perspective and employing various media, including painting, photography, installation, and highly performative video works that use his own body. His solo exhibitions include “The Drifting Thinker” (MoCA Pavilion, Shanghai, 2017) and “Our Condition” (URANO, Tokyo, 2017), while group exhibitions include the Water and Land Niigata Art Festival (2018), “Sights and Sounds: Highlights” (Jewish Museum, New York, 2016), and “In the Wake—Japanese Photographers Respond to 3/11” (Museum of Fine Arts, Boston, 2015). He is a finalist for the Nissan Art Award 2020. 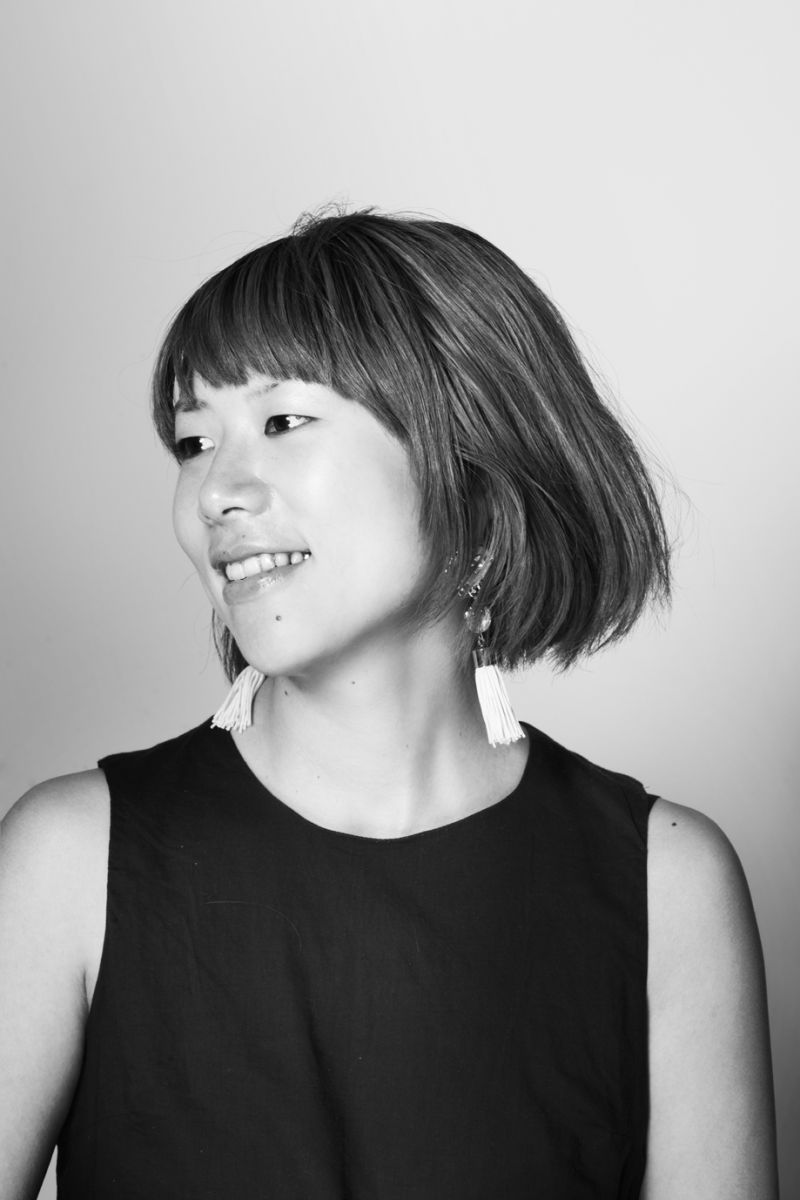 Born 1980 in Kanagawa, Japan. Lives in Tokyo, Japan.
Yuko Mohri’s practice encompasses installations that sense invisible and intangible energies such as magnetism, gravity, and light. Her major solo exhibitions include “Voluta” (Camden Arts Centre, London, 2018) and “Yuko Mohri: Assume That There Is Friction and Resistance” (Towada Art Center, Aomori, 2018). Her work has been exhibited at such international exhibitions as the Asia Pacific Triennial 2018 (Australia), Lyon Biennale 2017 (France), Kochi-Muziris Biennale 2016 (Kochi, India), and Yokohama Triennale 2014. Mohri stayed in the United States in 2015 as an Asian Cultural Council grantee. Her awards include the Nissan Art Award Grand Prix in 2015, the Kanagawa Culture Prize Future Award in 2016, and the 67th Minister of Education, Culture, Sports, Science and Technology’s Art Encouragement Prize in 2017.

Born 1973 in Paris, France. Lives in Marseille, France.
Emmanuelle Lainé creates site-specific installations that focus on the unique characteristics of the location of each exhibition, incorporating the attributes of the venue well as its architectural elements, and even researching the working environment for the staff employed there. Her installations that combine full-scale photographs with organic materials and familiar everyday objects have been exhibited widely, particularly in Europe. She has held solo exhibitions at the Hayward Gallery’s HENI Project Space (London, 2018), FRAC Champagne-Ardenne (Reims, France, 2018), and Palais de Tokyo (Paris, 2018). Major international exhibitions include the Lyon Biennale (2015).

【Supported by grants from】