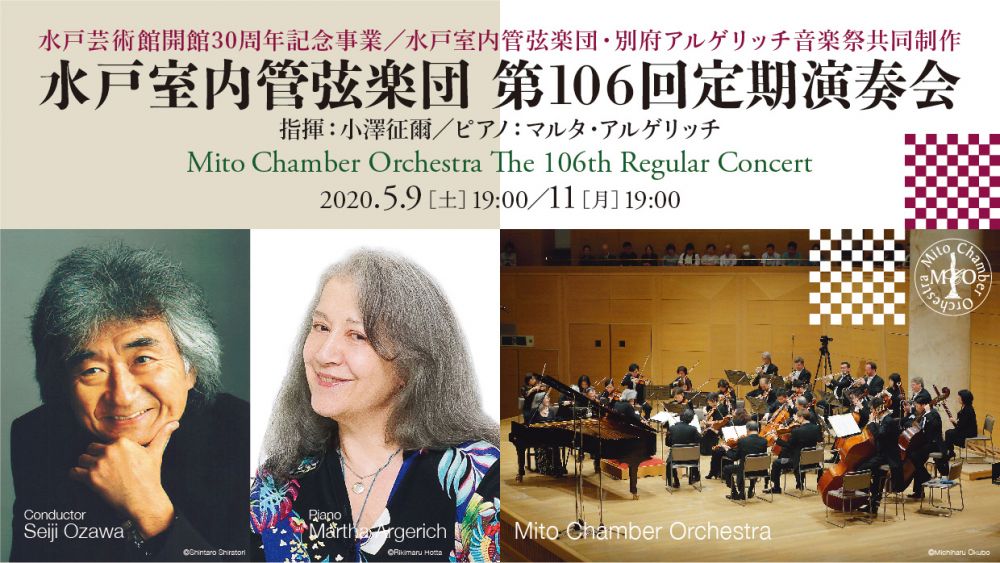 【About the Cancellation of the performance】

By the visa limit measures that Japanese Government took in order to prevent the spread of new coronavirus (COVID-19) infections, the members, whose resident is in Europe or the U.S., is not able to visit Japan. Therefore, we regret to announce the cancellation of this performance.

We are deeply sorry about this inconvenience to our valued audience.
Thank you very much for your patience during this uncertain time.


※Seiji Ozawa is scheduled to conduct the program of Part 2. However, there is some possibility that he is not able to do due to his health condition. In that case, the Part 2 will be without conductor and the ticket price would be the same. We appreciate your understanding.

Born 1935 in Shenyang, China. Seiji Ozawa studied piano from a young age, and after graduating from Seijo Junior High School, he went on to study conducting under Hideo Saito at the Toho School of Music.
In 1959, he won first prize at the International Competition of Orchestra Conductors held in Besançon, and was invited the next summer to Tanglewood by Charles Munch, who was a judge at the competition and music director of the Boston Symphony Orchestra at the time. He proceeded to study under Karajan and Bernstein and went on to serve as assistant conductor of the New York Philharmonic, music director of the Chicago Symphony Orchestra’s Ravinia Festival, music director of the Toronto Symphony Orchestra, and music director of the San Francisco Symphony. In 1973, he became the 13th music director of the Boston Symphony Orchestra, where his tenure of 29 years was the longest in the history of American orchestras.
In autumn 2002, Ozawa became music director at Wiener Staatsoper, a position he held until spring 2010. His reputation and popularity are enormous in Europe, where he has conducted many orchestras including the Berliner Philharmoniker and the Vienna Philharmonic. He has also appeared in prominent opera houses such as Wiener Staatsoper in Vienna, l'Opéra National de Paris, Teatro alla Scala in Milan, Opera di Firenze, and the Metropolitan Opera in New York.
In Japan, Ozawa formed the Saito Kinen Orchestra with Kazuyoshi Akiyama in 1984 to commemorate their late mentor, Hideo Saito. The orchestra held greatly successful concerts in Tokyo and Osaka and went on to tour Europe in 1987, 1989, and 1990. In 1991, it performed concerts in Europe and America and was received with great accolades. These activities lead to the inception of Ozawa’s artistic dream in 1992: the Saito Kinen Festival Matsumoto. Ozawa became director of this international music festival, a role that continues to this day. SKO continued to tour, with overseas concerts in 1994, 1997 and 2004. From 2015, the festival has entered a new stage as the “Seiji Ozawa Matsumoto Festival”.
Ozawa has been particularly focused on education such as the Chamber Music Academy Okushiga, the Seiji Ozawa Music Academy, and the Seiji Ozawa International Academy Switzerland, working actively to cultivate young musicians through performance.
Ozawa has won many awards in Japan and abroad, including: the Asahi Prize (1985); an Honorary Doctorate from Harvard University (2000); the Austrian Cross of Honour for Science and Art, First Class (2002); the Mainichi Art Award (2003); the Suntory Music Prize (2003); an Honorary Doctorate from the Sorbonne University of France (2004); Honorary Membership from the Wiener Staatsoper (2007); France’s Officier de la Légion d'Honneur (2008); Foreign Associated Member in the Académie des Beaux-Arts de l'Institut de France (2008); the Order of Culture, which is the highest honor in Japan (2008); Giglio D’Oro by Premio Galileo 2000 Foundation of Italy (2008); the first Japanese national to be bestowed honorary membership to the Vienna Philharmonic (2010); the Praemium Imperiale from the Japan Art Association (2011); the Akeo Watanabe Foundation Music Award (2011); and the Kennedy Center Honors (2015). In February 2016, the Ravel “L’enfant et les sortilèges” album conducted by Seiji Ozawa and performed by the Saito Kinen Orchestra that was recorded at the 2013 Saito Kinen Festival Matsumoto won the 58th Grammy Award for Best Opera Recording. In 2016, he was named an Honorary Member of the Berliner Philharmoniker.
Ozawa has worked closely with the Mito Chamber Orchestra since its founding in 1990, serving as general director of the orchestra as well as director general of Art Tower Mito from 2013. 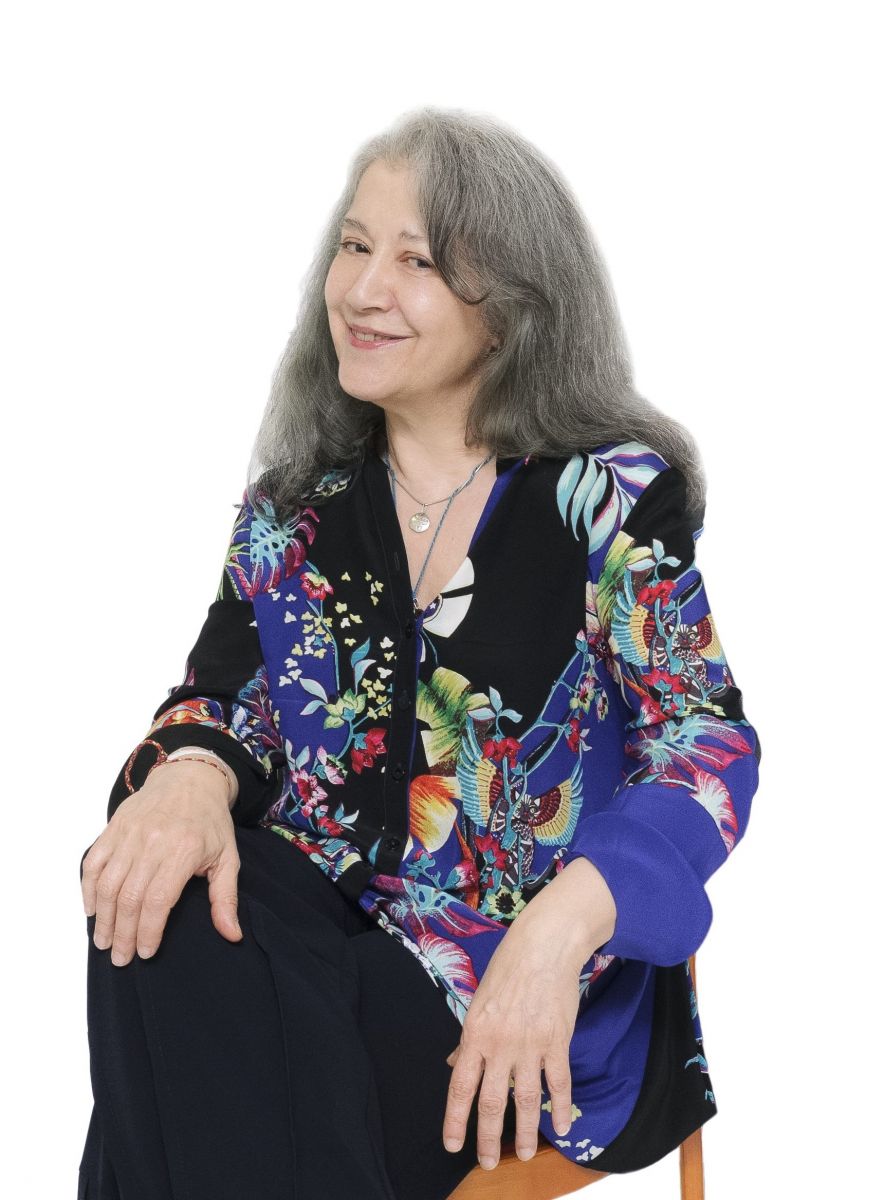 Martha Argerich was born in Buenos Aires, Argentina. She began piano lessons at the age of five, studying with Vincenzo Scaramuzza, and displayed her genius. When she was eight years old, Argerich made her debut as a pianist playing piano concertos composed by Mozart and Beethoven. In 1955, she moved with her family to Europe where she continued her studies with Magaloff, Gulda, Mrs. Lipatti, Stefan Askenase and Michelangeli. In 1957, Argerich won the Busoni and Geneva International Competitions, and then she began to give concerts actively. In 1965, she won First Prize at the Chopin Competition, which established her indisputable prestige as a pianist in the world. Since then, Argerich has been one of the most prominent pianists in the world in both popularity and ability.
Argerich's repertoires range very widely to the extent they cover from Bach through Messiaen. She always has invitations from renowned orchestras, conductors and music festivals in Europe, Japan and the United States. Argerich has also made chamber music a significant part of her musical life. She regularly plays duos with violinist Gidon Kremer and cellist Mischa Maisky. Argerich also plays many pieces for two pianos and for four-hands with Nelson Freire and Alexandre Rabinovitch.
Since 1994, she has served as Honorary Music Director of the Philharmonia Hall at Beppu B-Con Plaza in Japan. In 1995, Argerich gave her first solo recital in ten years, which music fans around the world had waited for, at the "Beppu Argerich Concert '95". The Concert drew much attention throughout the world. In 1996, she was decorated with the Ordre des Arts et des Lettres (officier) by the Government of France. In 1997, Argerich was appointed as a member of Accademia Nazionale di Santa Cecilia in Rome. In December the same year, she became an honorary foreign citizen of Oita Prefecture.
Since 1996 Argerich has assumed the post of General Director of Beppu Argerich Music Festival, and played with artists from around the world, including those from Asia. She is also much interested in giving advice to young musicians and held her own Master Class at the Music Festival. Her innovative approach to music making continues to have an impact on music in Japan and the world.
In September 1999 the Martha Argerich International Piano Competition was launched in Buenos Aires. In 2001 Argerich was awarded the 2nd Arturo Benedetti Michelangeli International Prize from Arturo Benedetti Michelangeli International Piano Festival of Brescia Bergamo. From November 2001 the Martha Argerich Festival, Buenos Aires was held under her general direction as a sister festival to the Beppu Argerich Music Festival. The Progetto Martha Argerich has been held at the Lugano Festival, Switzerland every year.
Argerich was awarded the Order of the Rising Sun, Gold Rays with Rosette from the Government of Japan, in commendation for her achievements through the Beppu Argerich Music Festival in 2005. In the same year, she also received the Praemium Imperiale from the Japan Art Association. In 2016 Argerich was awarded the Order of the Rising Sun, Gold Rays with Neck Ribbon by the Government of Japan. The decoration was awarded for the achievements of her music activities for forty-six years in Japan since her first visit, and for contributions to the development of music culture and promotion of friendship and goodwill in Japan through the activities of the Argerich Arts Foundation. In the same year she also received the Kennedy Center Honors which praises achievements made in the field of culture and arts in the U.S. In October 2018, she received an Italian Republic decoration "Commendator."
Her CDs have been released by numerous labels such as Deutsche Grammophon, EMI, RCA, Sony, Philips, and Teldec, and she has received the Grammy Awards, Le Monde de la Musique CHOC Award, Grammophon Awards the Artist of the Year, and German Record Critics' Annual Award, to name a just a few.

Pre-order for the sponsors

Pre-order for the supporting members

THE IBARAKI SHIMBUN Co.,Ltd., Mito Chamber of Commerce and Industry