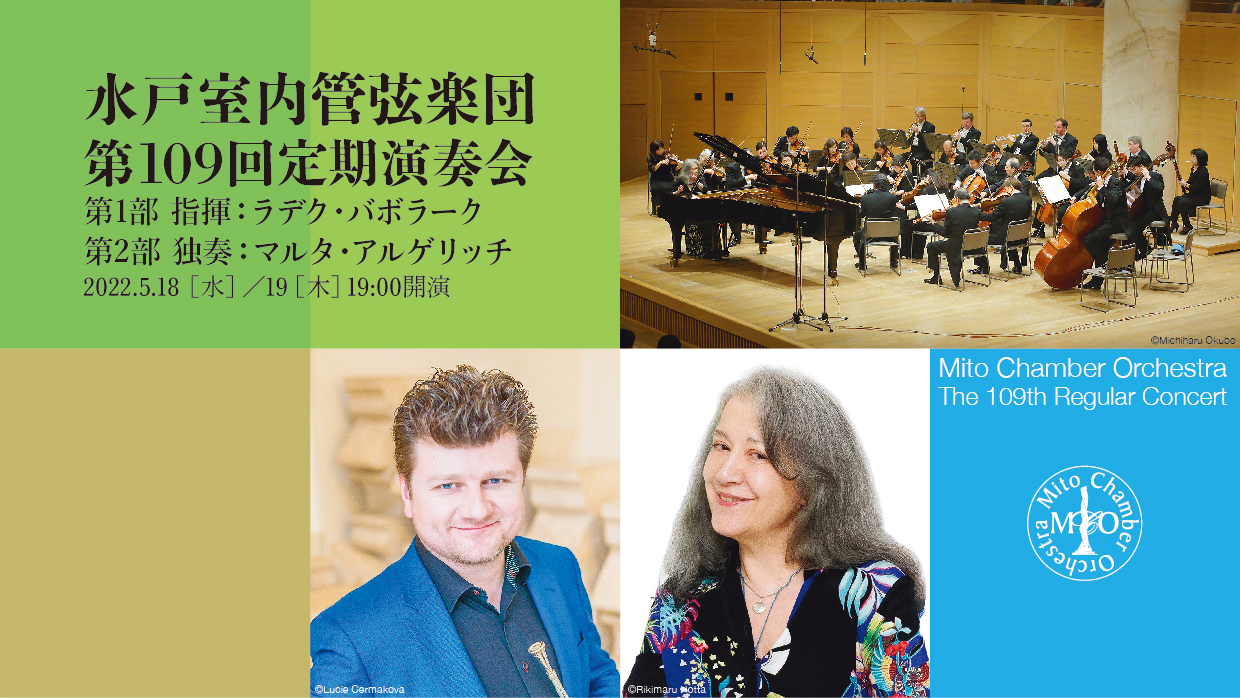 The horn player and conductor Radek Baborák is one of the most outstanding figures on the classical music scene. Since beginning his solo career over twenty-five years ago, his extraordinary musical performances have enthralled audiences in the most important cultural venues around the world. He has collaborated with many distinguished conductors, including Daniel Barenboim, Seiji Ozawa, Simon Rattle, Neeme Järvi, James Levine, Vladimir Askhenazy, James de Priest and Marek Janowski.

His concerts have been broadcast by television and radio stations including: Euro Arts, BR, ARD, NHK, CT, RTVE and he has made recordings for EMI, Supraphon, Exton, Arte Nova, Artesmon and Animal Music.

Between 2003-2010, Baborák held the post of principal horn at the Berlin Philharmonic. He also appeared as a soloist with the orchestra, performing alongside Ian Bostridge and conducter Simon Rattle (Britten, the Serenade for Tenor, Horn and Strings), at the Prague Estate Theatre with Daniel Barenboim (Mozart, Concerto in D-Major), at the Berlin Philharmonic Hall (Schumann, Concertpiece for Four Horns) and with the conductor Dmitri Kitajenko (Gliere, Concerto in B-Major).

The opening concert of the Olympic Games in Nagano marked the beginning of a long-term collaboration with Maestro Seiji Ozawa. Baborák became a member of the Saito Kinen Orchestra and Mito Chamber Orchestra, and regularly gives concerts with them in Japan, USA and Europe. With their chief conductor Maestro Ozawa, Baborák recorded the complete set of Mozart horn concertos and the Sinfonia Concertante (Sony), and as a soloist/conductor he also performed compositions by Haydn, Rosseti, Hosokawa, Mozart, Britten and others. When on a European tour with the Mito Chamber Orchestra, Baborák was asked by members of the orchestra to step in for the indisposed Seiji Ozawa and thus his career as conductor was launched.

Over a period of ten years, Baborák has recorded more than twenty CDs for the Japanese label Octavia Records (Exton,Cryston), among them music by J.S.Bach, which reached tens of thousands of listeners. The Baborák Ensemble CD received the Japanese critics’ prize. The recording of arrangements of Anton Bruckner’s compositions (Bruckner in Cathedral I, II) by the Czech Horn Chorus, with the organist Aleš Bárta, and under the leadership of Miloš Bok, was received with great enthusiasm. Among other releases are: Baborák’s recital with the pianist Yoko Kikuchi (Beethoven and French music) with the harpist Naoko Yoshino (Réve) and solo CDs (Baborák Plays Etudes, The New Dimension), Mozart’s and Haydn’s Symphonies (Prague, Clock, Noon, Symphony in G-minor) and horn concertos with the Czech Sinfonietta Orchestra where Baborák took up the role of conductor.

An essential part of Radek Baborák’s musical life is chamber music. He founded and has been the leader of several ensembles: the Baborák Ensemble, in principal consisting of french horn and string quartet; the Czech Horn Chorus, which continues the 300 year-old tradition of horn playing in the Czech Lands; and the string ensemble Prague Chamber Soloists, whose founding in 1960 is linked with Václav Neumann. He is a member of the Afflatus Quintet, which received first prize at the ARD competition in Munich in 1997. Baborák plays in recitals with the pianist Yoko Kukuchi - the winner of the Mozart Competition in Salzburg, with the organist Aleš Bárta and harpist Jana Boušková. He is a member of Berlin-Munich-Vienna Oktett and collaborates with the Berlin Baroque Soloists.

Radek Baborák had been a senior lecturer at the Fondazione Arturo Toscanini in Parma and holds the position of guest professor at TOHO University Tokyo, Escuela Superior de Música Reina Sofia and teaches at the Academy of Music in Prague. He has led horn courses in Germany and Switzerland.

Radek Baborák was born in Pardubice in 1976 into a musical family. At the age of eight he started learning the horn with Prof. Karel Křenek. Under his leadership he became the overall winner of the Prague Radio Competition Concertino Praga, received third prize at the Prague Spring Competition, first prize in the Competition for Interpreters of Contemporary Music and became laureate of the Grand Prix Unesco.

Between 1990-1994 he continued his studies at the Prague Conservatoire in Prof. Bedřich Tylšar’s class. During his studies he won competitions in Geneva in 1993, Markneukirchen in 1994 and ARD in Munich in 1994. In 1995 he was awarded the Grammy Award Classic and the Dawidov Prize.

Martha Argerich was born in Buenos Aires, Argentina. She began piano lessons at the age of five, studying with Vincenzo Scaramuzza, and displayed her genius. When she was eight years old, Argerich made her debut as a pianist playing piano concertos composed by Mozart and Beethoven. In 1955, she moved with her family to Europe where she continued her studies with Magaloff, Gulda, Mrs. Lipatti, Stefan Askenase and Michelangeli. In 1957, Argerich won the Busoni and Geneva International Competitions, and then she began to give concerts actively. In 1965, she won First Prize at the Chopin Competition, which established her indisputable prestige as a pianist in the world. Since then, Argerich has been one of the most prominent pianists in the world in both popularity and ability.
Argerich's repertoires range very widely to the extent they cover from Bach through Messiaen. She always has invitations from renowned orchestras, conductors and music festivals in Europe, Japan and the United States. Argerich has also made chamber music a significant part of her musical life. She regularly plays duos with violinist Gidon Kremer and cellist Mischa Maisky. Argerich also plays many pieces for two pianos and for four-hands with Nelson Freire and Alexandre Rabinovitch.
Since 1994, she has served as Honorary Music Director of the Philharmonia Hall at Beppu B-Con Plaza in Japan. In 1995, Argerich gave her first solo recital in ten years, which music fans around the world had waited for, at the "Beppu Argerich Concert '95". The Concert drew much attention throughout the world. In 1996, she was decorated with the Ordre des Arts et des Lettres (officier) by the Government of France. In 1997, Argerich was appointed as a member of Accademia Nazionale di Santa Cecilia in Rome. In December the same year, she became an honorary foreign citizen of Oita Prefecture.
Since 1996 Argerich has assumed the post of General Director of Beppu Argerich Music Festival, and played with artists from around the world, including those from Asia. She is also much interested in giving advice to young musicians and held her own Master Class at the Music Festival. Her innovative approach to music making continues to have an impact on music in Japan and the world.
In September 1999 the Martha Argerich International Piano Competition was launched in Buenos Aires. In 2001 Argerich was awarded the 2nd Arturo Benedetti Michelangeli International Prize from Arturo Benedetti Michelangeli International Piano Festival of Brescia Bergamo. From November 2001 the Martha Argerich Festival, Buenos Aires was held under her general direction as a sister festival to the Beppu Argerich Music Festival. The Progetto Martha Argerich has been held at the Lugano Festival, Switzerland every year.
Argerich was awarded the Order of the Rising Sun, Gold Rays with Rosette from the Government of Japan, in commendation for her achievements through the Beppu Argerich Music Festival in 2005. In the same year, she also received the Praemium Imperiale from the Japan Art Association. In 2016 Argerich was awarded the Order of the Rising Sun, Gold Rays with Neck Ribbon by the Government of Japan. The decoration was awarded for the achievements of her music activities for forty-six years in Japan since her first visit, and for contributions to the development of music culture and promotion of friendship and goodwill in Japan through the activities of the Argerich Arts Foundation. In the same year she also received the Kennedy Center Honors which praises achievements made in the field of culture and arts in the U.S. In October 2018, she received an Italian Republic decoration "Commendator."
Her CDs have been released by numerous labels such as Deutsche Grammophon, EMI, RCA, Sony, Philips, and Teldec, and she has received the Grammy Awards, Le Monde de la Musique CHOC Award, Grammophon Awards the Artist of the Year, and German Record Critics’ Annual Award, to name a just a few.

【To prevent the spread of the COVID-19】

●There would be possibility to cancel the concert or to change the program due to the situation of the COVID-19. Please check our website or social media (Twitter, Facebook) to get the latest information.
●To measure body temperature, we install an infrared thermography machine at the entrance of our building. Please note that we will not allow person with body temperature over 37.5 degrees to enter.
●Please wear mask in the concert hall.
●Maintain at least 1 metre distance between yourself and others.
●Those who are unwell, please refrain from attending the performance.
●Please wash your hand diligently and use alcohol disinfection.
●Please refrain from waiting for the performers at the Stage Door. If you bring presents or bouquets, our staff will keep and hand over these to the performer.

Pre-order for the sponsors

Pre-order for the supporting members

The Ibaraki Shimbun Co., Ltd., The Mito Chamber of Commerce and Industry

◎This is a special discount ticket for age under 25 (No admittance to pre-school children).
◎A document for age-verification will be required when you enter the concert hall.
◎This ticket is available only at Art Tower Mito Entrance Hall Ticket Counter or Ticket Reservation Center.